Part sales have started for Toyota’s GR Heritage Parts program. Supra enthusiasts from all over the world were eagerly anticipating this moment. But even more interesting is the fact that Toyota has added the famous 2000GT model to the line of supported plattforms for GR Heritage Parts, which makes perfect sense with the 2000GT being Toyota’s most iconic classic car, highly sought after and reaching sales prices of more than 1 Mio USD nowadays. We are happy to see that the Supra is valued by its manufacturer as much as it’s most prestigous classic car.

For the 2000GT Toyota has announced reproduction of drive train parts, such as the whole gearbox and the rear differential. Makes us Supra enthusiasts hope that Toyota might consider reproducing the Getrag V160 one day, too 🙂

For the A80 Supra door handles are the first parts that are sold under the GR Heritage brand since July 1st. Unlike the original parts, which came already painted in one of the Supra’s body colors, the reproduction parts come unpainted.

Further information has been published regarding the types of parts sold under the GR Heritage banner: “Revival Parts” are newly produced parts with the same specification as they were sold originally. “Substitute parts” on the other hand are replacements, that meet the same specification as the original part, but may differ in material and/or other functional areas. The A80 door handles for instance are marketed as “Revival Parts”.

Check out the latest news on GR Heritage parts on the official homepage toyotagazooracing.com/gr/heritage/ and order parts through your nearest Toyota dealer. 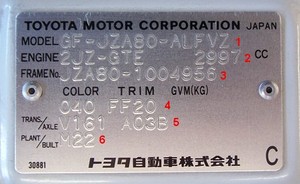