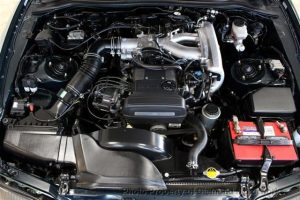 2JZ-GE N/A with intake manifold above the cylinder head 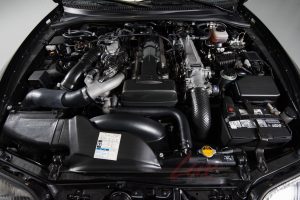 .The lineup consisted from 2 different body-, 2 engine-, 2 brake and 3-gearbox types. There was the Liftback Model with a rigid roof (sold in some countries as the “Coupé”) and there was the Aerotop Version with a removable aluminium targa roof (sold as the “Sports Roof”-Version in some countries). The Aerotop Version is equipped with additional body reinforcements for the benefit of torsional stiffness which increases body weight by 30kg compared to the Liftback.

Engine-wise both three-liter inline six-cylinder variants descending from the JZ-Family were available. The base model was equipped with the naturally-aspirated 2JZ-GE pushing 225hp according to DIN standards. Some refer to this engine as the “NT” (Non-Turbo). The 2JZ-GTE “Two-Way Twin-Turbo”-Version derived from the N/A-Powerplant is boosted by twin CT12 turbochargers.

Two different types of brake-systems are in account of deceleration.

The large brake-system consists of 4-piston calipers on the front axle and 2-piston in the rear. Brake disc diameter is 323mm (front) and 324mm (rear).

The 4-channel anti-lock brake system which all versions apart from one exception (Supra SZ 1993-1996) came standard with is fed with with data from a lateral deceleration-sensor.

Rear-wheel slip is controlled by a traction control TRC and depending on the version by a “Torsen” type limited-slip differential (LSD).

The Supra’s body-design features a coefficient of drag between 0.31 (version without rear wing and with small brake-system) and 0.33 (with rear wing and large brake-system). The huge rear wing the Supra is known for decreases uplift in the rear by 70% in addition to the aerodynamically shaped “duck-tail” hatch door.

An electronically deploying front-spoiler adds down-force in the front at speeds over 90kph. It retracts behind the front-lip at speeds lower than 70kph.

Only available in Japan and Europe: Active Front Spoiler

MKIV Supras can be divided into the following specifications:

Export Specs which can be furthermore divided into the following:
US-Spec
EU-Spec
GCC-Spec and Gen-Spec/Model

Development
Sales Figures
To Top
Do NOT follow this link or you will be banned from the site!